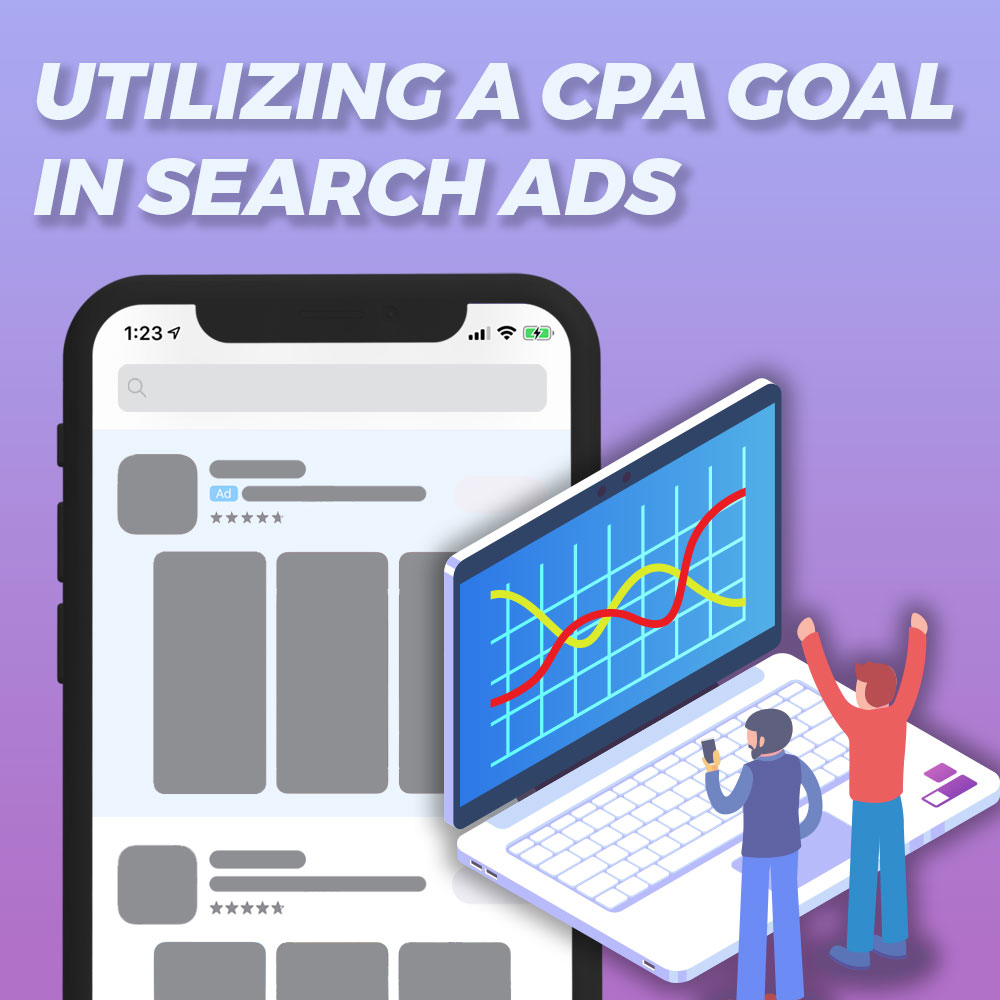 Apple Search Ads have become a staple in most user acquisition campaigns for App Store Developers. While many marketers and developers have discovered effective structures for their account, there’s an often overlooked (and optional) setting that needs to be looked at: CPA Goals

What is a target CPA

The CPA Goal parameter is applied at the Ad Group level and by Apple’s definition is: “The cost-per-acquisition goal is the amount you’re willing to spend for a conversion. Setting a CPA goal is completely optional.”

Not even Apple itself gives much attention to CPA Goals! Only four sentences in all of Apple’s Search Ads literature is dedicated to CPAs. One of these sentences is “Cost-per-acquisition (CPA) goals are optional.” Additionally, when setting up your Search Ads campaigns, the CPA Goal field, by default, is hidden!

A target CPA is pretty basic in principle, in theory. How much are you willing to pay for a user to download your app? How CPA Goals work is what marketers and developers need to understand.

How do CPAs goals work?

Adding a CPA goal to your Search Ads campaign encourages Apple’s auction algorithm to intelligently choose the auctions that your ad is being entered into. By having this CPA Goal set, Apple’s algorithm will be a little bit “picky” in terms of which auctions you’ll enter because the system will prioritize the auctions in which they feel you will achieve the highest conversions rate in order to match (or come close) to your CPA Goal. This (again, in theory) increases the quality of impressions and taps that you’re getting.

NOTE: In some cases, defining a CPA Goal may limit the volume of impressions and traffic to your ads due to the “picky” nature of the auction system when a CPA Goal is defined.

Let’s take a look at a CPA Goal utilized in a real, active, campaign. Here are the campaign stats:

For the first few months, we had no defined CPA Goal, but actively edited individual keyword bids programmatically (via our Search Ads API) based on specific requirements (TTR, CR, CPA, etc…). We wanted to test the concept of adding a CPA Goal on this specific campaign (only 1 Ad Group), in order to measure impact and performance. We looked at data from the beginning of the month (7/1/19), through today (7/16/19). The CPA Goal was added to the campaign on 7/12/19.

The effect on CPA?

A 42% drop in CPA, without making any other changes than defining a CPA Goal!

Average CPA per day for the month:

Let’s look at Impressions, Installs and CPT during July: 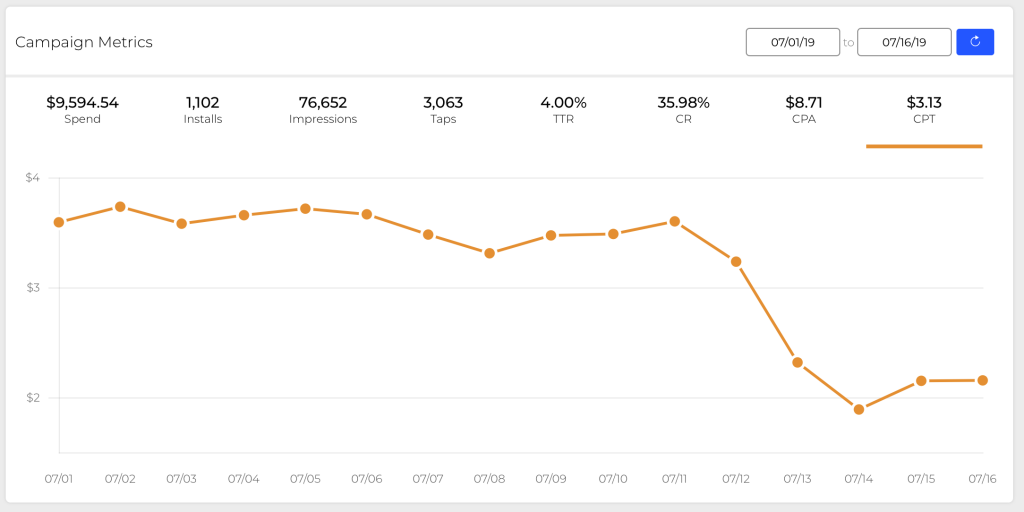 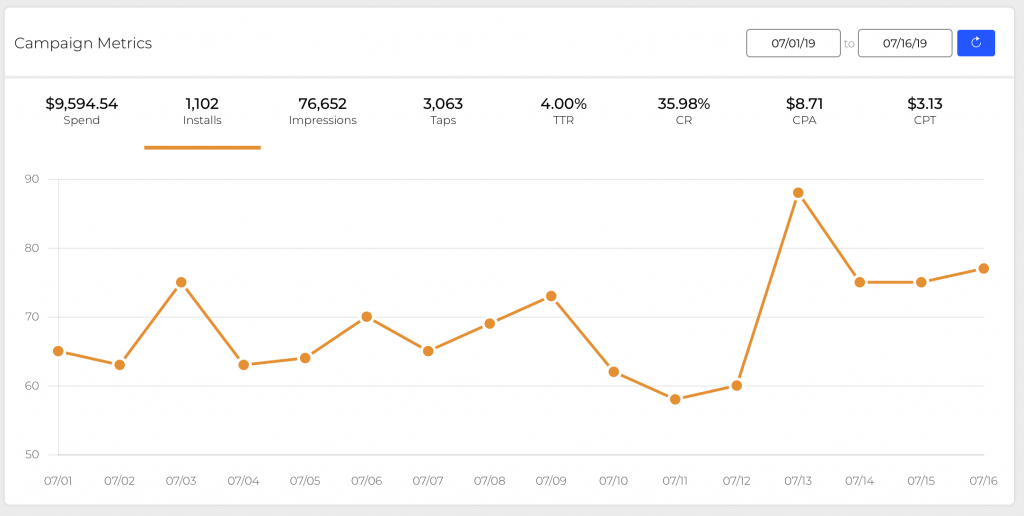 Looking at these results and data, you can see that almost immediately after implementing the CPA Goal into this Campaign/Ad Group, we saw a massive decrease in CPA/CPT, along with a huge jump in impressions and installs. These data points are pretty convincing when it comes to utilizing CPA Goals.

Keep in mind, the data we’ve reviewed is from one recent Ad Group. By no means are we saying that every app should implement CPA Goals, but it should absolutely become a strategy that you can test on a case-by-case basis to see if it works for you.

Try testing out a target CPA in a one or two of your campaigns and monitor the performance of the end CPA, along with downstream performance. In some instance, the results can be extremely positive and in others, it may be detrimental to your ad’s visibility. CPA Goals might not be the best for every app or campaign, because they can lead to limited exposure for your app.

Something to keep in mind is that you need to be realistic with your CPA Goal. Defining a CPA goal that is extremely low can completely ruin your exposure and impressions. Apple actually tells users: “Be realistic when setting the cost you can afford to pay for a conversion. If you set your CPA goal too low you can miss out on valuable impressions and taps.”

Something to keep in mind is once you define your CPA Goal, try to modify the amount over the course of the next few weeks. Making a large increase to your CPA Goal can stimulate visibility and growth, while a large decrease can help control spending and lower your end CPA.

Want to see how CPAs can work for you? Contact our ASO experts to see how we can help your Search Ads strategy!