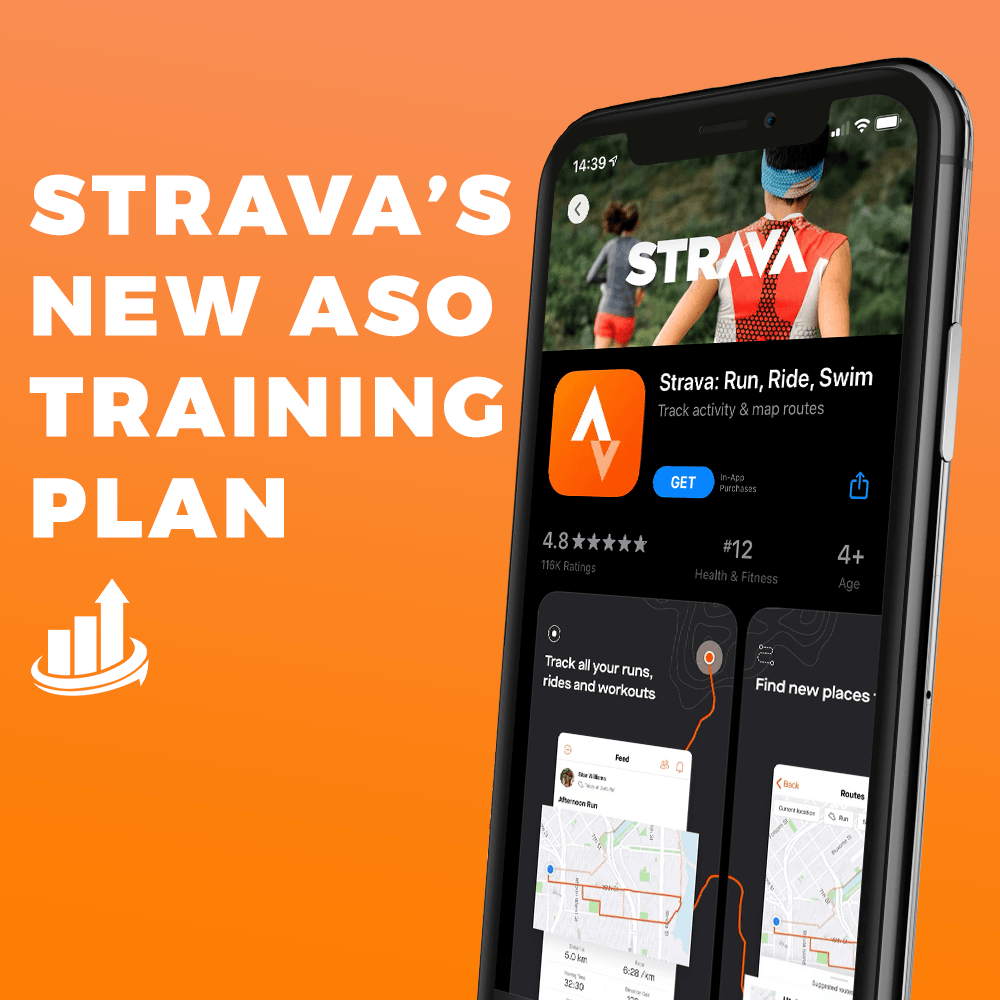 With everyone still stuck at home and not quite ready to go back to their gym, exercising has become the only thing keeping a lot of people sane. I’ve never seen so many people outside running, walking their dogs or biking – and I’m from Florida so that’s saying A LOT. With a lot of people suddenly becoming fitness addicts (out of pure necessity, let’s be honest), fitness tracking apps are booming. Let’s take a look at fitness mapper, Strava to see if their ASO is in tip top shape.

Upon first glance, Strava’s Title seems to be pretty solid on the keyword side. They expand upon just their name and add in three keywords. Mission accomplished, right? Maybe. “Run” is a pretty good keyword to put in your title (56/100 volume). “Ride” and “swim” are less strong at 40/100 and 34/100 volume, respectively. Strava isn’t in the top 20 for “ride”, nor the top 5 for “swim”. Are there better keywords that they could try? We’ve found that cycling keywords between the subtitle and title can be an effective way to “shake up” Apple’s algorithm to see if they prefer a specific keyword in a different piece of metadata. Our recommendation, mix up keywords and test different terms in the title vs subtitle.

The Play Store title effectively utilizes a lot of high volume and relevant terms. Their rankings for “running” (54/100) and “cycling” (49/100) are both within the top five. The title here is effectively implemented and is a strong example of how keywords can “mix” and don’t need to be exact phrases. Example: the exact phrase “swimming tracker” is not in the title, or description, but they still rank within the top 5. Our recommendation: try to find one or two last keywords to squeeze in with the extra 9 available characters.

Important keywords need to have effective density. I say effective, rather than “high” because it’s important to research competitors to understand what types of keyword density the apps around you are using, and what will work for you. Pulling the density count for Strava, they have fairly effective densities. The keywords with the highest density are “tracker”, “track”, “training” and “running”. However, they might be missing out on keywords such as “bike”, “run”, “ride”, etc, which are significantly lower than we would recommend. Again, we don’t recommend a specific density, because it’s important to do your research! Our recommendation: increase densities a bit on the core keywords and focus on keyword placement throughout the description.

Strava is effectively utilizing Creative Ad Sets within Apple Search Ads by adding additional screenshot “sets” to their listing. We would recommend utilizing specific screenshot sets that target specific keywords. Example: running focused screenshots would target running related keywords. Active testing is a key part of a successful ASO strategy. On the other hand, Strava doesn’t utilize a preview video. Generally speaking, we always recommend at least testing a preview video. An effectively designed video can improve conversions in a big way. Our recommendation: increase the text size on the current screenshots to improve legibility, and split test preview videos!

Ready to run with your ASO? Talk to one of our ASO “coaches” today to get an evaluation of your training plan!