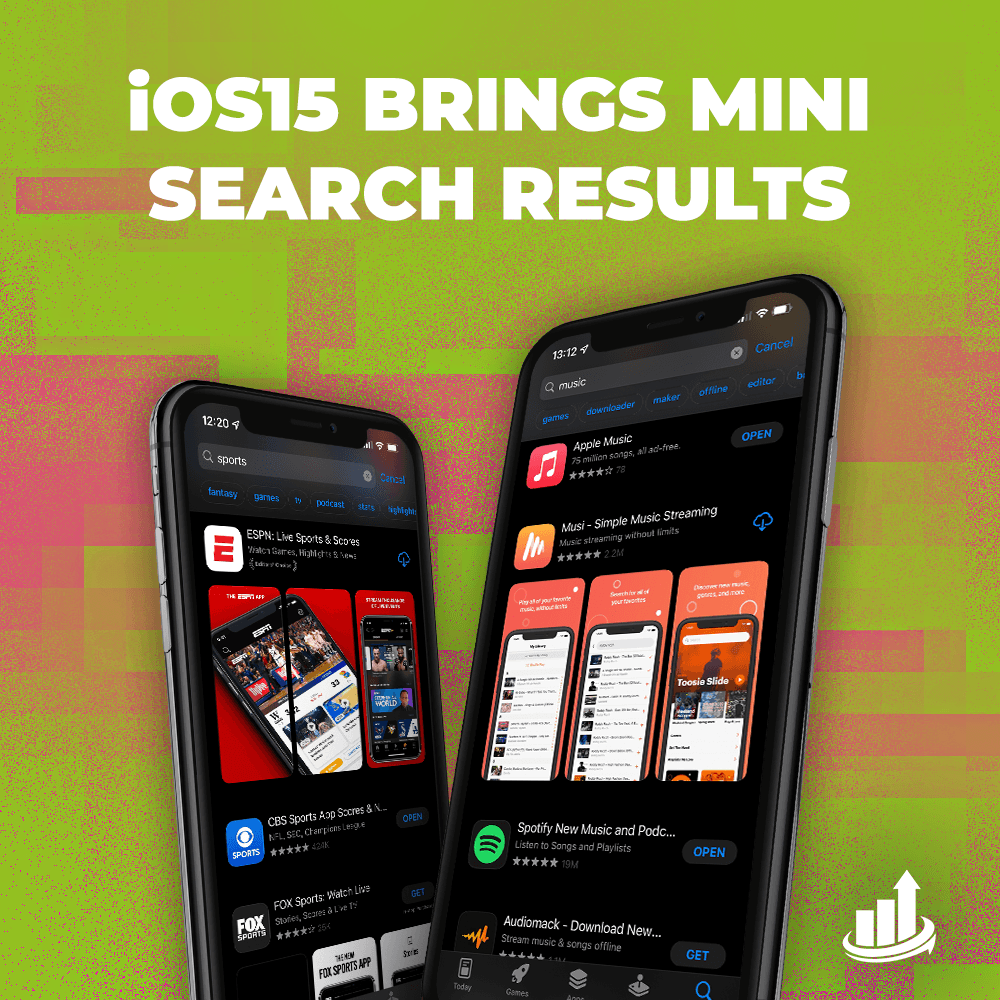 With iOS 15 rolling out earlier this week, millions of people across the globe are experiencing and exploring the latest and greatest of Apple’s creativity. While nothing has yet still topped the hype of dark mode from a few years ago, there are still some cool new features that Apple has given iOS users.

Something savvy iOS users noticed pretty quickly was a change in the Search results. When you perform a search on the App Store, the screenshots for apps that you already have don’t show up unless you click into the App Listing. Pretty interesting change, right? Let’s talk about what this means for ASO though.

Now, if you have an app, how can this benefit you? By our calculations, these shortened results take up about ¼ of the space that a full search result would usually take up. So, if you’re ranked 5th for a keyword where a user already has apps 1-4 downloaded? You’re essentially now in the #2 spot — top real estate-wise on someone’s phone. The odds of that specific scenario happening are pretty slim, but here’s a more likely one: You’re ranked #2 for a generic term, like fantasy football or tap games. A user already has the top app downloaded, which “shrinks” your competitor’s search results, effectively placing you at #1 (excluding any ads).

Can Returning Users Find You Again?

Our first question upon discovering the modified search results for downloaded apps was, “How does this affect returning users?” If a user downloads your app, your search result gets shrunk. Does Apple re-expand it if your app gets deleted? Or if the app is downloaded on a different device? Thankfully, the answer is Yes to both of those questions. We performed searches for apps that we had previously downloaded but erased and searched for apps for that we had downloaded currently on different devices (both other iPhones and iPads associated with the same Apple ID). In both scenarios, the searched-for apps had regular search result listings.

Even if a user has your app already downloaded and sees an ad for your app, your screenshots will still appear. Now, there’s not a huge value gained in showing ads to users that currently have your app downloaded, but it does show an interesting paradigm shift. Will users be more likely to just stop at the ad if they perform a search where the first few apps are already downloaded? Only time will tell. But Apple could be hoping to push more people into paying for Search Ads by giving it not only the top spot in search results but by making it the only listing guaranteed to show screenshots.

While this update from Apple is nothing as earth-shattering as all the new exciting places that Search Ads will be popping up (hopefully soon!), it is an interesting development. For apps currently ranked in the top 2-5 spots in search results, being able to claw up a user’s screen, even just a little bit, could create a bump in installs.